ARC on the News 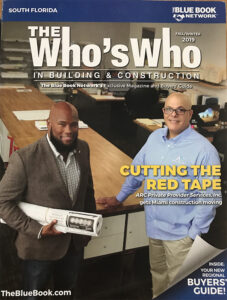 The old saying that time is money is perhaps no truer anywhere than in the construction industry. The wheels of local government turn slowly, and the longer it takes for a project to make its way through the plan review and permitting process means more time lost before construction can begin, further delaying the project’s revenue stream.

In a huge metropolitan area like Miami, where construction is a constant, the wait time for plan review and permitting can easily take nine months or more depending on the complexity of the project. Rick Bermudez and Nate Mateo, who both have years of experience in the permitting and inspection sectors, recognized the problem and saw an opportunity to improve the system. In 2015, they decided to team up to form ARC Private Provider Services, Inc.

“I’ve been involved in the permitting industry since 2005,” says Rick, who serves as President of ARC Private Provider Services. “I saw an opportunity and Nate and I decided to join forces and start this company. A private provider is basically a third-party plan review and inspection services company. If you have a development to be built in a municipality, you take the plans to the municipality and they might have a backlog of months. Instead, a developer can bring us the project and we do the plan review instead of the city. Our service can significantly reduce review times, and what might normally take nine months at the city may take four months with us.”

“A service like ours becomes a financially viable option for the developer, restauranteur or warehouse builder,” says Nate, who is the company’s Vice President. “We cut their review time in half, and it’s worth the extra cost. The developer in turn accelerates its revenue stream and reduces its turnaround time as it relates to plan review and inspections. A 24-month project now becomes a 16- to 18-month project and the developer can open for business or rent its units much sooner than originally planned, speeding up its ability to generate revenue. It’s a win-win for all parties involved.”

“Nate and I both realized there was a need that wasn’t being met,” Rick says. “We opened up to provide that missing service. Big companies have this option, but it wasn’t available for midsize projects (between $5 million and $20 million). What we did was meet that niche. For example, we did a restaurant in Miami Beach, and for every month of delay on this project the owner would have experienced a $120,000 revenue loss. Our services allowed this project to get done four and a half months sooner than projected in the original timeline, which represented more than $540,000 in accelerated revenue.”

“Most of our competition is much, much larger,” Rick adds. “They can’t provide the personal service and hometown feel we do. Because we are a private entity, if a customer’s design team has any issues, they don’t have to wait to get clarification on comments. They can call us and speak to us immediately. We can meet with the team and knock out any issues. In addition, when it comes to inspections, instead of waiting for the city to go out and do inspections, we do the inspections privately. This allows contractors a shorter window and less uncertainty. In some cases, if there are issues, the work can continue while they’re addressed. We can be there after hours, on weekends and some holidays, eliminating the need to have to conform to local building department standard work schedules. Our inspectors all work together in concert with contractors and owners, with no loss of communication.”

“Our size gives us a lot of control over how we do the job,” Nate agrees. “We’re very clear with our bills, we don’t add a lot of extra fees. We have a lot of respect for our clients. We pride ourselves on quality service, professionalism, accessibility and transparency. We cut through all the red tape. Not only in how we run the business, but in how we deal with our clients.”

Once Rick and Nate put out their shingle in May 2015, the response was immediate. They had plenty to keep themselves busy, shepherding their company through a plan of steady growth and doubling the number of projects they take on annually. During the company’s first full year, it had 15 projects. The next year that increased to 30 projects, then to 59 projects in a consistent growth trend that does not seem to be slowing down.

“When Nate and I started ARC Private Provider Services, we knew a lot of people in the industry,” Rick says. “When they found out we were doing this, they wondered why we waited so long. What we did in the beginning, which was counterintuitive, was to choose to go a controlled-growth route. We were initially approached by people wanting us to do huge projects, buildings of 40 to 50 stories. We chose to take on projects that were smaller and more manageable that wouldn’t hamper our ability to serve the client and provide quality services. We stuck with the smaller projects and decided to cut our teeth on those, to work out the kinks before we took on the larger projects. We realized that for the sake of the long-term viability of the company, we had to take it one step at a time, with measured growth.” 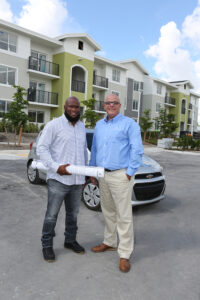 In 2019, they decided to reduce the number of projects they took on, allowing the partners to focus on opening the door to projects of a larger scale. “When we first started, we were taking on residential, restaurants and small commercial spaces,” Nate says. “What we’re doing now is a whole new ballgame. The jobs we’re able to take on now are double or triple the size of what we’ve done before.”

Expanding its capacity to tackle larger projects enabled ARC Private Provider Services to perform work for The Markers Grove Isle, a $125 million luxury condominium development in Miami that spans multiple buildings. In addition to its residential and restaurant work, the company is looking to take on some new industrial projects. The largest project ARC Private Provider Services has been involved in is the new Liberty Square development in Miami, a $400+ million project and the largest affordable housing development in the country.

The Related Group, the developer of the project, began work with ARC Private Provider Services after a recommendation by MODIS Architects, the architecture firm responsible for the design of Liberty Square.

“Rick and Nate, along with the rest of the team, are good for their word,” says Kareem Brantley, a Project Manager at Related Group. “They provided excellent service and were able to solve any problems that arose, quickly and professionally.”

To assist with Liberty Square, ARC Private Provider Services conducted a plan review on the early phases for 377,000 square feet of construction. The company also performed inspections in lieu of the city of Miami. Because of this work, the project was able to proceed much more quickly.

“The city of Miami has a six- to eight-month building plan review process,” Kareem says. “With ARC Private Provider Services, we were able to cut the time down to get a vertical construction permit in about 60 days. They also coordinated our master permit following our phase permit. All this allowed us to start construction six months ahead.”

When the entire development is completed, Liberty Square will include a 40,000-square-foot grocery store, more than 1,500 residential units and 15,000 square feet for local retailers, as well as a community and health center. In addition, it will offer units for very low-income residents with special needs and low-income seniors alongside workforce housing. The leaders of ARC Private Provider Services are very proud of their contribution on this project.

ARC Private Provider Services started out with a staff of just three people, but has expanded to a staff of 30 over the last few years, including administrators, reviewers and inspectors. Still, Rick and Nate have been careful to maintain a small, family atmosphere in the office, which gives them an advantage they say their competition just can’t replicate. 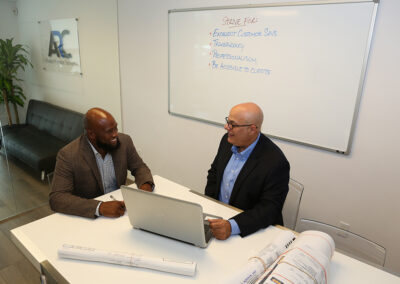 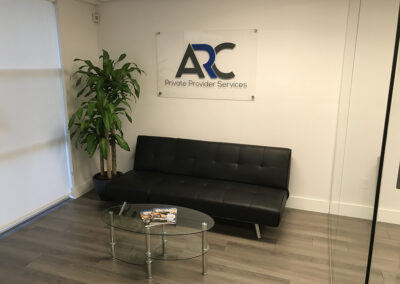 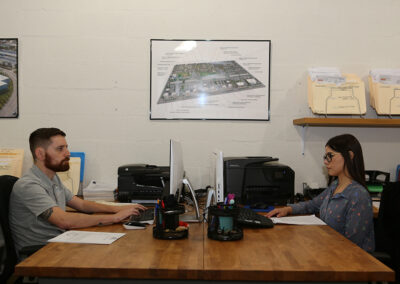 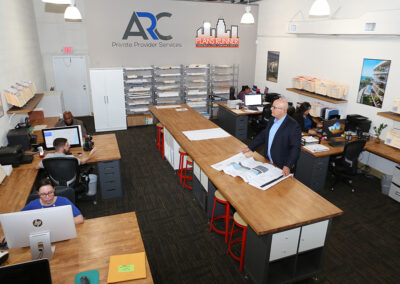 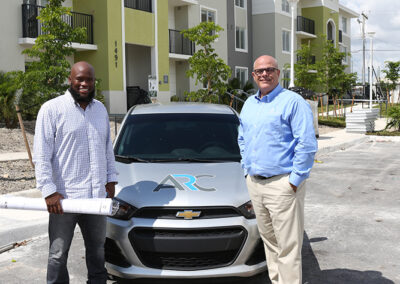 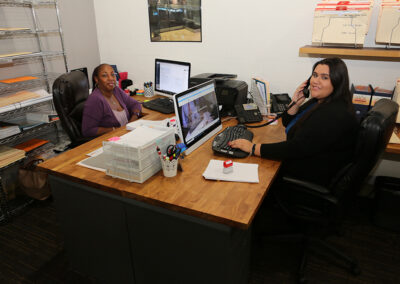 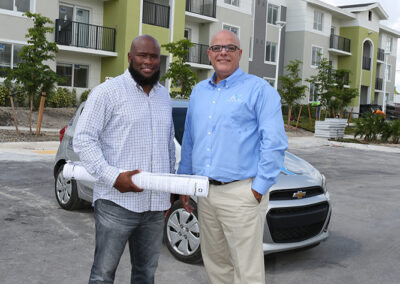 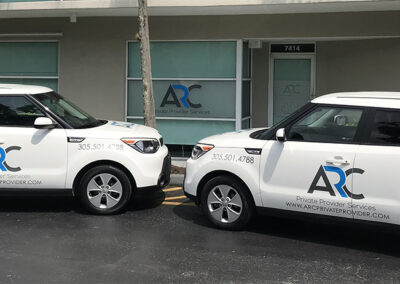 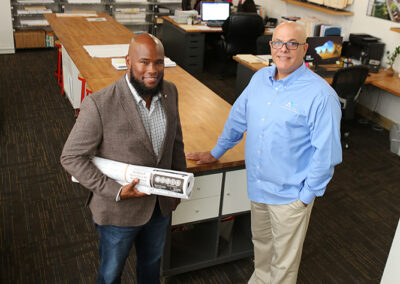 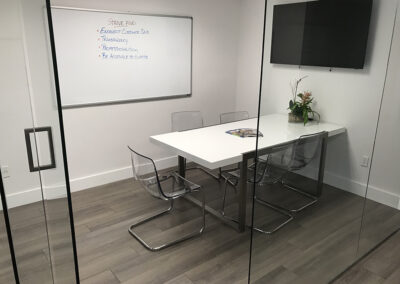 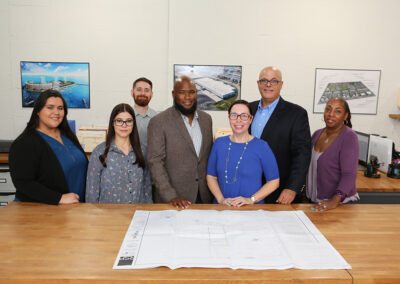 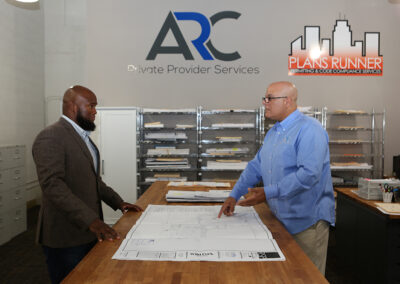 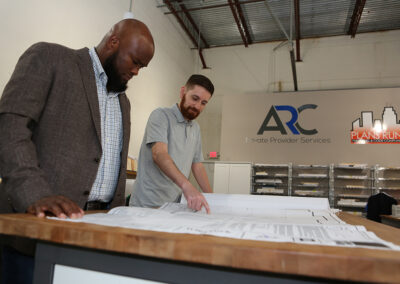 Get your Project completed FAST!

Want to get started right away?
Drop us an email, give us a call or fill out our form.
We can start the process of getting your permits expedited today

With over 10 years of experience, The ARC team is a well Organized, Talented, and Experienced group of Professionals in the Private Provider industry. As Experts in this industry our skills allow us to be a Valuable Resource offering one-stop solutions, saving you Time and Money, regardless of the complexity of your particular project or your clients.